I’ve been working on a few ASP.Net projects and one of the key aspects of this project is creating some usable XSD schemas that are then translated into objects.

At first, I started using the regular xsd.exe that creates a class (in either VB or C#) from a schema with the simple statement.

But I always wanted to have this directly within Visual Studio. I’m sure there’s another way (so please let me know) but then I found
Xsd2Code .net class generator3.0.

It does the same thing that XSD does but also lets you create add Serialize and DeSerialize options, making it easier to convert a basic XML file into an object.

The best part is that it’s a Visual Studio plug-in (from Codeplex of course), so you can right-click on an XSD file and have it generate the necessary code. By default, the Serialization methods aren’t included – but it’s an option right from the generate dialog, shown here. 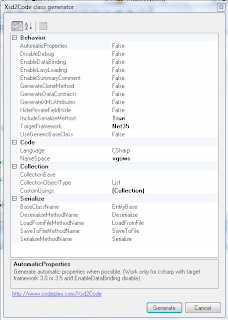 Anyone know of other tools for this purpose?