(note: the title refers to a review for developers – this is not about how to develop specifically for Windows 7 but rather a review of Windows 7 from the point of a developer and how its changes may affect you.)

Ars Technica does a very detailed review of Windows 7, going through key features and also the left-over bits of Vista. I’m using Windows 7 and find when I move over to XP or even Windows 2003, I really miss many features and so definitely recommend upgrading but let’s go through the details on the review.

I’ve been using Windows 7 on and off now in beta and in its public form for over a year. While I never could wrap my head and get totally into Vista (I typically used Windows 2003 as a workstation – but I had to install and remove it for Trish twice), my first impressions of Windows 7 were very positive. The way Microsoft has “fixed” UAC for security is HUGE and while I still get a few “Are you sure you want to” dialogs, it’s far less frequent than in Vista and one of the main reasons, in my mind, for developers (and users) to upgrade.

For an end user, the review is good but software developers should really take note, as it delves into the new user interface guidelines (also available in PDF) and even points out how inconsistent some Windows 7 pieces can be.

One feature I love about Windows 7 is the new Snipping tool. Developers with Snag-It will scoff at its limited feature but it does make it much easier for grabbing screen shots for regular users, instead of the old Ctrl+Print screen. I use Jing a fair bit on non-Snag it machines and it has stopped working occasionally in Windows 7, making the tool that much more useful.

But let me address some of the review points head on:

Ars actually slams the Windows 7 UI on several points, many of which I agree with. It’s very bizarre to switch between the new UI in the control panel and find that some elements conform to the new user interface whereas others go back to the old Windows-XP style dialogs. Hey, you can’t redesign everything – but just it feels wrong, as though even a little change would have been more welcome.

Some quick examples can be easily seen in the Control Panel. The Power options look new and fresh: 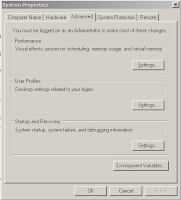 So far, I see three different UI approaches going on : the new look (like the Power Settings), the old XP properties and then the hybrid MMC look, found in the Device Manager, etc. As I go through different aspects of the Windows 7 control panel for the first time, you never really know which one you’re going to get. Granted, there are definite problems with the new approach for complex dialogs but even the basic experience just feels “confusing”.

As Those who have read some of my Advisor articles know, I do enjoy the inductive approach to user interfaces (while others don’t) so it’s maddening to me that Microsoft is still going between the three choices. There are pros and cons to each – but choose one already.

But as a developer, I understand this. I’m converting over a legacy FoxPro app that started as a DOS app and I’m moving over the key pieces into a more current interface based on the functions users use. Sure, while VFP 9 can run backward-compatible so a DOS-based UI can be used, the switching between a new interface and the older one definitely shows inconsistencies in an application. (I’ll post on this later as it’s definitely an experience).

The new Taskbar
I first lamented the loss of the Quick Launch (you can still reactivate it if you really miss it) – but I’m finding between the Jump List and the ability to pin on demand, it’s a very welcome replacement. The comment on Ars where “number of applications offering this level of integration is currently low” is really related to the right-click functionality. Any application that supports document opening from the Explorer immediately supports the Recent functionality, including Visual FoxPro. Of course, if you’re constantly opening VCX and SCX files, it may not really help. I’ve been running Ubuntu on another machine and the Taskbar concept is fairly similar between the two, making it easier to switch back and forth.

What I’m finding very useful about the new task bar is the awareness of what apps I’m really using. I use Wakoopa to track what applications I use on a variety of machines but on my primary workstation, it has helped cement my regular tasks to the point where I don’t use SlickRun half as much as I used to.

The Start menu itself also makes it easier to find those recent files. I don’t have FoxIt Reader pinned to my task bar, even though I use it frequently for reading, but the ability to immediately see what I’ve recently opened is definitely welcomed.

That said, the other part of the new start menu, the Start Menu search, is still as unusable on my machine as under Vista. I know many people rave about how nice it is to find applications but on my laptop (a Toshiba Satellite L300 with 4 GB RAM), searching for a simple word like “Feed” or “Hand” takes an initial 3 seconds simply to get any results. I find other areas of the Windows Explorer UI just as sluggish.

Document Libraries
Windows 7 introduces the concept of Libraries which is a huge improvement over My Documents. Rather than forcing users to put files into My Documents, Libraries let you specify which folders you want to use for Documents, Video, Music, Pictures, etc.
So immediately, I add my own “Projects” folder to My Documents and ensure it is indexed so I can find them fairly quickly. You can also add network drives so it isn’t just limited to your machine.

One thing to be aware of is that thumbnails seem to be gone and some of the previews don’t show. The secret is that the default option under Advanced for viewing is “Always Show Images, not thumbnails” – who thought of that?

Search? What search.
The Windows 7 and Vista search suffer from the “Google” UI approach – a single box where you have to know what the modifiers are to make it useful (datemodified, size). I recall a post by yag, where he commented on how new interns follow that concept, just put a single search box and have it search everything. This sounds great in concept but in a real application where users are comfortable putting information into fields (like Date Started or Customer Name and Part Name), users almost always wanted the traditional search where you put details into what you wanted to search for. That’s a generational difference for sure, but having to know the modifiers, yuck. I see some experienced computer users who still type text into the search box and then instead of just hitting enter, move their mouse over to the Search button to initiate the search.

A list of default search modifiers (or filters, as Microsoft calls them) is available here. They also work with Windows Desktop search in XP and Vista.

Developer hint: you can create your own filter handler tags – see the MSDN article here.

One issue I have with the Windows Library concept may be specific to my machine (but others might be experiencing it) is a lag that seems to occur when searching or loading a simple folder. Sometimes the folder automatically refreshes (like XP) when I drop a new file into it, but other times I have to hit F5 to refresh it. I suspect the problem is related to when in an actual folder vs. a “library”, which is akin to a virtual folder.

Devices
Ars Technica goes through the Devices page in details but one thing that I have observed is that it is *imperative* that you upgrade your drivers, especially if you are using things like SD Cards that are built into your computer. Sometimes, perfectly good SD cards don’t show up or refresh until after I either a) restart or b) reload the driver.

Ars goes through more of the details for under the hood enhancements and some of the built-in applications. I think everyone will immediately notice the changes to Paint (making it more Office 2007-like) and others – but many of the changes are things that I don’t use much anymore. I switched from a Windows Smartphone to an iPhone so the Mobile sync doesn’t really apply that much and most of my Mail (now handled through Live Essentials) is done through gMail. One weird change was that Movie Maker is now part of Live Essentials instead of the operating systems. The main reasoning behind that is the development life cycle. There can be improvements rolled out to that product that are separate from the OS updates. It also elevates the Live brand a bit more but is Movie Maker really a tool that belongs in a “web-based” suite like Live? I haven’t worked with it that much in the new versions but it doesn’t quite make sense in that regard.

Multi-touch needs to wait for more devices and as we’ve seen, some of the Vista enhancements like Sideshow have never taken off. Multi-touch shows a lot of promise, though, as its implementations are being felt across the entire industry.

At the end, Ars reverts back to the old comment that Windows 7 is really “Windows Vista SP2”, even so far as version #s go. I think it’s the other way around. I think Windows Vista was more like a badly released beta and that Windows 7 is what they should have released in the first place. Considering that gMail was in beta just until recently, I don’t think that’s a far stretch.

2 thoughts on “Windows 7 – review for developers”

Join our email list to receive the latest updates.