I just looked at my notebook which was up during the weekend. While the one page loaded was Newsgator (and not much else), Windows was reporting low virtual memory. I took a look at the task manager. Egad!! 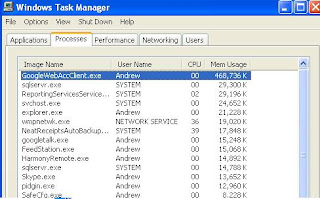 I wonder what it was accelerating that required it to take over a third of my computer’s memory.

Since Firefox is also known to be a bit of a memory hog when it’s been running for prolonged periods of time, it’s always a good idea to shut down Firefox (and maybe even Google Accelerator) when not in use. Anyone else seen this?