As I look over at these drawings, I went over to my filing cabinet and pulled out a rendition I had done up over 15 years ago (maybe even longer – it was before I was doing Fox stuff) of what I thought should be Apple’s first “mobile” device. ( I was going to scan it but then thought better of it since Apple’s lawyers would probably be all over the “Apple” logo I thought looked cool on it).

Keyboard? Who needs one. From my spec: “A speech digitizer and microphone would record users’ comments for layer playback or communications with other users via modem. Microphone would be activated by pressing either of the side buttoms making it easy for both left and right handed people. Speech would be sampled allowing for clear but not stereo quality…compression similar to MACE…one pressed, a control on the screen would relay the digitized message back through the headset or a small speaker”

All touch screen and the only buttons on the device would switch you into different “modes” such as modem, day timer or phone numbers.

The neat part was the three jacks : headphone, one for a radio (cellular) antenna and another for direct modem communications.

My vision was that I could record my comments, send them and then software on the receiving end would either a) convert them into text or b) just let them be played.

Wow – how the world has changed – or has it? Granted, I didn’t originally think about video (which is part of what Apple is apparently revealing on Tuesday for their iPods) – and who needs a direct modem jack in this world. But everytime I hear about new patent drawings, I’m always drawn back to this old document.

The saddest thing? I have no DATE on this document. Nada – nothing – so unless I want to hire Dan Rather to do some print and paper dating, I would never be able to prove I had the idea of an “Apple handheld” first.

Ah – what the heck! Here is a quick capture of it: 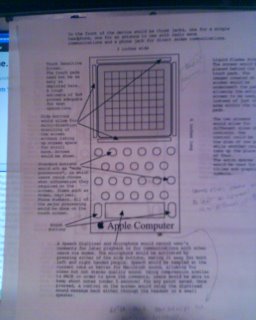 I always think of all these great ideas that have come up in the past (Markus and I worked on an interactive Form Builder for within an application back in 1995) – things that were ideas that now slowly become reality. Go figure.